Have you ever had a Chicken Little in your life?  Maybe you had a friend or family member who thought everything that happened to them was the absolute worst or the absolute best EVER!  They call you up to tell you about a chipped nail and lament they had the worst day ever.  Or they tell you they found a penny on the ground and it was the happiest day of their life!  My guess is that you dread talking to that person because they are either very high or very low and you can’t understand why they think this way.  It makes you tired.  When you try to give them your perspective, they are quick to get back on their emotional roller coaster.  So, eventually, you start to avoid them. 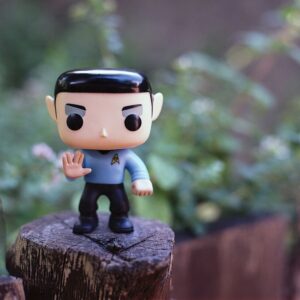 On the flip side, have you ever had a Dr. Spock in your life?  You know, that person who, when you try to share good or bad news with them, they explain, in a logical way why that event happened.  Or they try to tell you what you need to do to make it better.  They seem more robot than human.  Nothing seems to upset them or ruffle their feathers.  They do not understand that you are having an emotional, human response and simply want another human to listen and to be supportive.

Chicken Little and Dr. Spock see the world in black and white.  You and I know that the world is full of gray areas.  If we are not looking for the shades of gray, we tend to miss out on a lot of our own lives and the lives of others.

Living in the Gray

So, to prevent yourself from becoming a Chicken Little and making all life events the best or worst ever, or a Dr. Spock, who is void of emotion, you can create a rating scale.  Think about a scale that goes from 1 – 100.   One represents those events that have little or no emotional impact on you.  Think about and identify an event that you would rate as a one.  Maybe that is getting a mosquito bite or chipping a fingernail.

The purpose of the scale is to help you put into perspective what life throws at you.  It helps you identify what is the appropriate response.  Sometimes we tend to over react to something.  We put so much emotional energy into a situation that turns out to be less impactful than we initially thought and wonder why we are so exhausted and frustrated.  By using your rating scale, you immediately recognize how significant this event is in your life, not someone else’s.  The scale lets you know how to respond accordingly.  You ultimately, save yourself time and energy!

So, don’t be like Chicken Little and waste your emotion and energy.  Do as Dr. Spock would say, “Live long and prosper!”

For emergency services please call 911 or go to your nearest emergency department. Additional resources include the National Suicide Prevention Lifeline at 1-800-273-8255.